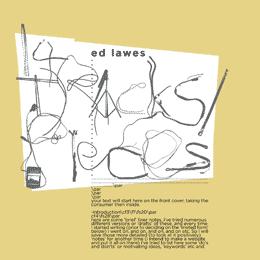 Ed Lawes is a mate of Warp's soundsmith extroadinaire, Chris Clark. He came to the attention of Planet Mu after Clark put in a good word for him. Friends in high places, eh? Still, any accusation that "it's not what you know, it's who you know" would be unfair in this case, as Lawes appears to know an awful lot, and the things he doesn't know about probably aren't worth knowing anyway.

This album is the culmination of three years of personal research and experimentation. It's more like an audio journal than a collection of finished compositions. Most artists prefer to give you the final, fully-formed work with no explanations as to how it was constructed or arrived at. By contrast, Lawes gives us the all the bare, skeletal frameworks of sound and provides copious sleeve notes to (try to) explain how each 'piece' was arrived at. It's the sound of learning, of small but hard-won victories and minute increments of knowledge gained through trail, error, determination and inspiration. It's a quite remarkable album, really. Often bizarre. Occasionally beautiful. Never less than fascinating.

Here's a picture of Ed, stolen from the Planet Mu site: 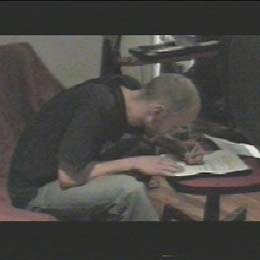 Ed wears his art on his sleeve (notes)

He looks exactly the way I'd imagine: feverishly scribbling notes on his latest 'piece'; too wrapped-up in his own thoughts to even look up and say 'cheese' for the camera. Intense, consumed, oblivious to all around him. The thing is, Ed isn't just into electronic music and machines and all that, he's interested in the big picture - chords, harmonies, tunings, dynamics, harmonics...the very building-blocks of composition, and he'll use whatever is at hand to explore such things, whether it's a PC, a trumpet or his brother's violin with the rusty strings. Ed's trying to crack the DNA code of music. It's a process that no doubt all the truly great composers, from Bach to Brian Wilson, went through in the quest for understanding. Without his friendship with Clark, we probably wouldn't be hearing anything from Lawes for a while yet. But as it is, we're getting an advance preview of a talent in the embryonic stages of development. Maybe he'll eventually be regarded as one of the great composers of the 21st Century!

Perhaps one track/piece that encapsulates what this album is all about is "Fewer Ways/More Ways/24 v.a.ish" which starts out with some very basic trumpet noises (as though Ed had never played one before) then suddenly opening-out into a vast array of harmonic possibilities as various overdubbed notes blend and separate creating an ever-changing tonescape of 'tricky' chords. From minimal to maximal, or from 'dry' to 'wet' as Lawes prefers to refer to it. On "An Ordered Set", similarly complex harmonies are achieved with an alto clarinet. Ed goes into some detail to explain the methodology here, talking about 'minor thirds',' equal temperament' and other concepts that I have only the most tenuous grasp of...to me it just sounds like the sort of tension building incidental music you used to get in '70s American 'cops & robbers' TV shows (which is a huge compliment, by the way) . Elsewhere, we get offered everything from Clark-like digital musique concrete ("Actually Real") to jaunty trad-jazz noodling with live drums ("Four Changes On Non-Themes")

This is a full track for you to take away and stroke your chin to for a while, chosen simply because it demonstrates Lawes' prowess with both digital and electro-acoustic forms, moving from one to the other in a.....ah, fuck it - I'll just let Ed explain it in his own words...

2003/a clear form (two distinguishable parts, one blends into the other)/ after (Chris) Clark's 'farewell track' form as I hear it/ tempo changes are used like phrases and ornamentation/ it's state is never stable/ some of the gestures are created through subliminal layers that are almost inaudible, but are 'felt' as part of the whole (listen to rumblings to offset the temporary rhythm)/ unreal and digital in the way of 'actually real' as one route to 'abstraction'/ the ending escapes into the no-man's land of micro tonality, free of the black and white separation but still wrongly (this time) framed by it, (it's traditional/cultural opposite is forever in the name 'microtonal' when it should stand for 'all', there is no 'them', only 'us' (this is not a conceptual oddity interfering with the 'purity' of music ('real, heartfelt or absolute music')

Got that? Apparently, Ed's supposed to be setting up a website where he'll be going into even more detail on his working methods, which will be nice for the downloaders, as it would be a shame to miss-out on his stream of consciousness musings.

I reckon that when Lawes begins applying all the things he's learned to fully-realised compositions/projects, the results will probably be amazing. For now, "14 Tracks/Pieces" gives us a tantalising glimpse of what is to come.
Posted by N.E. at 12:57 PM