IT'S GRIMM DOWN SOUTH

I find the trend within Dubstep towards ethnic/eastern atmospheres somewhat curious. For such a quintessentially urban music, the desire to evoke the mood of faraway places seems almost like a cop-out; an escapist fantasy for those towerblock-dwelling inner city lifers. I like it better when it's staring reality hard in the face. But I s'pose that's easy for me to say when I'm living a fairly comfy lifestyle in a quiet little cul-de-sac where you don't have to worry too much if you forget to lock your car at night. 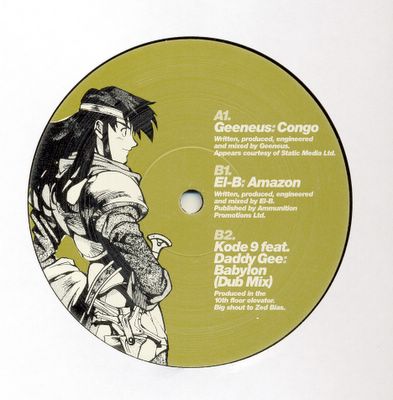 There's a couple of very obvious examples of this 'exotic' angle on Tempa Allstars Vol. 2. Geeneus gives us "Congo" which, with it's mellow birdsong, elephant-trumpeting atmospherics and smooth rollin', sleek production seems dangerously close to the new age blandness of Goa Trance (could Geeneus become the new Sven Vath - christ I hope not!). Far better is El-B's "Amazon", who's title might conjure similar suggestions of chilled-out fun in paradise, but actually winds the tension springs tight with pensive hair-trigger guitar licks and ominous trumpet samples that seem more in common with the ethno-industrial-funk of early '80s outfit 23 Skidoo.

Even better is a white label I came across by Random Trio Productions (RTP001). Using similarly portentous samples of wind-instruments, I can't help but be reminded of some of Richard H. Kirk's spooked-out clarinet calls on the early Cabaret Voltaire releases. But what makes the A side "Lost City" so compelling is it's vast sense of emptiness; the way it suggests a sense of environment by very subtle use of samples over a hard, economical riddim. Sometimes less really does mean more! Of the two b-side offerings, "Shoalin" is classic 'oingy boingy' bongo-beats with a nice ethnic flute melody loop, whilst "Marachi" sails out even further into lithe, minimal drum meditation with brief wisps of impressionistic sound-matter flitting across the mix like mosquitoes. It might not be the soundtrack to my life, but this is a compelling release nontheless. Who are the mysterious Trio? 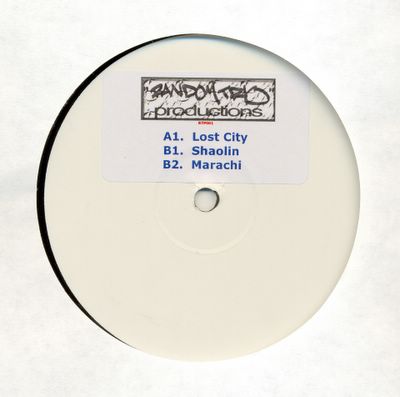 You might remember that I featured another track called "Lost City" a while back, though that one was by Digital Mystikz. Whilst Random Trio's lost city might be some relic of the Incas swallowed by dense vegetation in the steamy jungle , the Mystic's is some dank, dark labyrinthian nether-world that lies beneath the city streets. It's that focus on urban environments and mythologies that appeals to me more in general. I tracked down a copy of the EP from which it came, DMZ002 (even though I already had some reasonably good MP3 copies), because it's such a crucial, definitive statement of 'where it's at' that I just felt the need to own and cherish a 'real' copy. 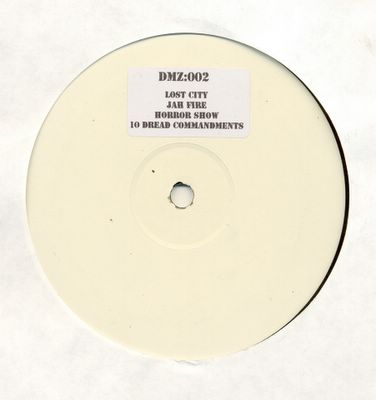 The other absolutely killer tune on this EP is "Horror Show", which I'm reliably informed is actually by Loefah. Paul Autonomic's latest post on Darkside Jungle exhumes an old article written by Mark K-Punk back in 1994. Excellent reading, naturally, but as Mark pointed out, Darkside 'displaces dread into celebration'; it's sheer propulsive energy transforming terror into a spine-tingling euphoria - Dread becomes an attractive state to be in. Yet Dubstep has it's own darkside that refuses to synthesis light from the darkness. At it's most severe, as on "Horror Show", the sense of trepidation remains unrelieved, the beats grind-out a slow, cancerous death-march whilst distant, pleading voices scream out in alarm or become warped intangible ghost-talk swimming in the ether. The opening sampled monologue is seriously nasty, in a calm, controlled way. "...I do not hope for a better world for anyone, in fact I want my pain to be inflicted on others" pretty much sums up this track's ouvre. There is no comfort to be found here, just unrelenting fear in the face of atrocity. How can it get any darker than this?!

I also finally tracked-down a copy of the first DMZ release, also on white label (are there any copies of these releases that have proper printed labels?) featuring the Loefah's excellent "Twis Up" on the A side and two other cuts (previously unknown to me) on the flip, the second of which "Chainba Music" is a more dynamic example of dubstep's own Darkside trip. The bad-tempered snares parry and thrust as though in a marshall arts swordfight, as chilling string-sweeps do battle with spooked-out bleep riffs creating an unremitting tension.

Where is all this dark energy coming from? Jungle's descent into darkness was in part owing to the drug culture of the time, as Ecstacy/amphetamine use hit overkill levels and degenerated into paranoia. Yet as far as I'm aware the Grime and Dubstep scenes aren't driven by drugs quite so much. Is it just down to skunkweed over-indulgence, causing a Tricky-like descent into woozy dead-eyed madness? Or is it simply a true artistic expression of these artist's feelings and environments? I'd be curious to see this sort of stuff played in a club environment. How do the crowds react to these uninviting slices of anti-joy? What are the expressions on their faces like? Are they having a good time?
Posted by N.E. at 12:16 PM