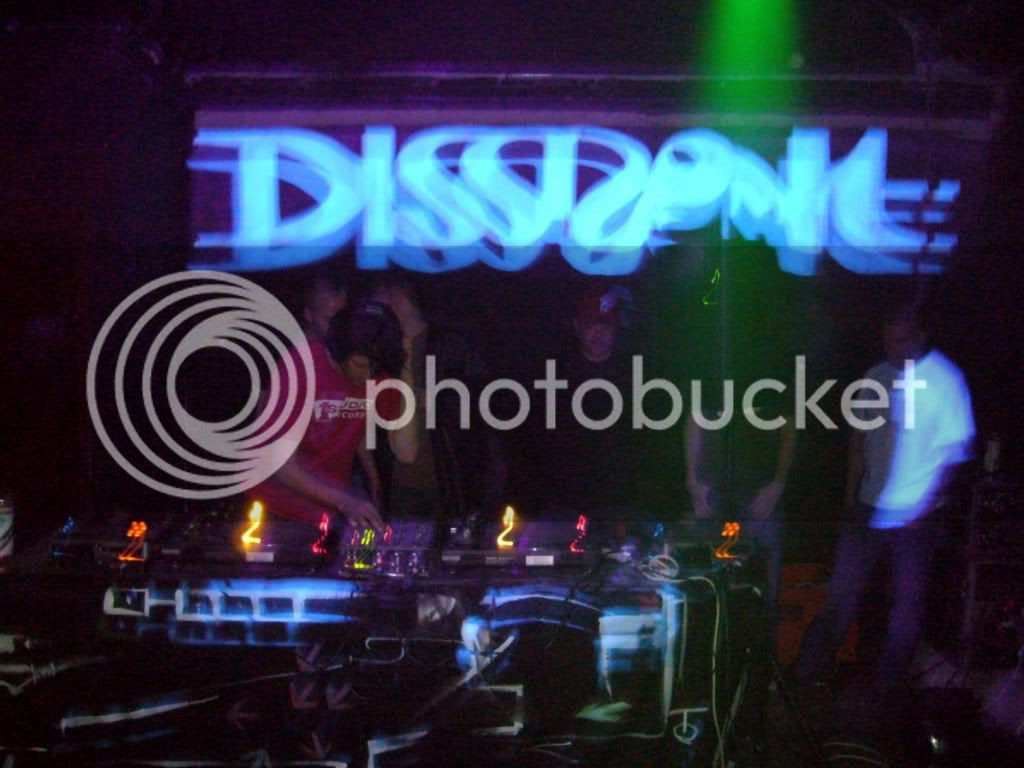 The Lakota club in Bristol played host to a massive Dissident all-night rave last night, offering a varied roster of artists from the worlds of d'n'b, breakcore, jungletek and all manner of breakbeat microgenres inbetween. But I was there specifically for a three-hour H.E.N.C.H. dubstep session in Room 3, tucked away on the top floor of this labyrinthian building. Hardly the centre of attention, it was nevertheless a significant event for me, as it proved that a level of self-sufficiency has been achieved for Bristolian dubstep. The fantasy of my fevered imagination is starting to become a reality. I reckon there was a hardcore audience of about 10-15 people, which would occasionally swell to nearly 50 over the course of the evening. Not bad when you consider that all the usual dubstep-devotees had taken a mass exodus to DMZ in London for the night! With Jack away, and my little Nokia phone only producing indistinct blurs in the near-total darkness, I was worried I wouldn't get any photographic evidence of the occasion. But then I found a few images at the Hijack forum. Thanks guys!

I arrived shortly before midnight to find Blazey in full swing, reppin' the Black Ops grime sounds for a small but appreciative audience. After that it was time for H.E.N.C.H.'s Bath-contingent to step up on the one's and two's, with DJ Wedge going back-to-back with Appleblim (who isn't actually a H.E.N.C.H. member, but lives in the same house as Wedge, which makes him family, I guess). Appleblim provided the only non-West Country sounds, via Digital Mystikz' "Earth Run A Red" and "Ancient Memories", a track from "Skreamisms Vol. 2" played from a very rare test pressing (from the rejected first batch), a bit of Skuba, Luke Envoy and of course his own "Fear Riddim", but this was a new vocal mix, featuring a ragga mc (forgot to ask who it was). This is the tune that updates the 'Mentasm' riff, but one of Appleblim's semi-famous friends reckoned it was just recycling the vibe of old Metalheadz records, yet they were just borrowing secondhand energy from Belgian Hardcore anyway. It was Joey Beltram who first found that 'hoover' preset buried in his Juno 106 synth around the turn of the '90s, and for me its one of those classic sonic signatures that's always ripe for a bit of re-contextualisation every few years. I mean, why deny yourself the pleasure? Wedge was mainly dropping his own beats with those really intense, undulating sub-bass lines that really come to life over a soundsystem. "Dogtown", "Vampire", "Fever"...all the 'Hits from Hades' that regular Dark FM listeners have been learning to love these past few months. But also new track "Trenchtown", which, although still driven by a distinctive Wedge-riddim, sees a slight loosening-up of the groove, with the addition of some well-placed hair-trigger skanky guitar licks. Big tune, that one. Definitely one for the ladies, of which there were quite a few in attendance. The track also features a sample from Alvin Lucier's classic tape-process piece "I Am Sitting In A Room", adding some weighty referencialism into the mix. There was also a track with a really weird, lurching riddim, which was apparently made by their other house mate, a guy called Will, who I've seen around a few times, but only got chatting to for the first time last night. It's early days for him yet, but I reckon there could be some potential there...

Wedge gets dark, as Headhunter looks on

Having been fucked-over by the Environmental Health at Subloaded last week, it was great to hear another set from the Headhunter, this time in full sonic effect. His tracks are characterised by serene, almost magisterial arrangements, beautifully executed and always driven by that pumping bassline sound and vast, carefully constructed halfstep beats that are filled with subtle cross-rhythms and percussive inflections. Truly sublime. And if you don't believe me, go ask Youngsta. This is just the beginning for Headhunter. Big plans are afoot, trust me. He also dropped a couple of tunes by Jakes, including the insane bassline gymnastics of "9 Barz". An off-the-cuff remark by Appleblim that Jakes's tunes are "like Coki's, but more fucked up" hits the nail on the head for me. I seriously love his shit. But where was he? A quick trip to the bar downstairs revealed the answer. Looking over the balcony into the main arena revealed that Jakes was busy whipping the d'n'b crowd into a frenzy, unaware that his tune was getting the rewind two floors above him. You see, in the drum 'n' bass world, Jakes is practically famous for his mic skills. He's even done a vocal on a TC tune called "Deep", which is getting heavy play on Radio 1 and prompted none other than Grooverider to proclaim "this is what drum and bass is all about right now". Yet, when he's not being a super-charismatic d'n'b mc, Jakes is at home cooking-up some seriously fucking twisted dubstep futurist shit. Weird, or what? He did manage to make a brief appearance during Headhunter's set, 'slumming it' with his H.E.N.C.H. colleagues, and instantly raised the energy levels by sheer force of personality. Although Scorpio was on hand for some solid hosting, she tends to ride the beats and remain fairly 'transparent', whilst Jakes is totally pro-active, involving the crowd with demands for the reload, and imploring us to "make some noise for the Headhuntaaaaahhh!!". Wherever Jakes is, there's an instant party vibe. But then he was off again, to host another party somewhere else. The man is superhuman.

Jakes, busy being famous downstairs
We were also treated to some more Tech Itch productions, including the venomous "Know", which will be on the second Ascension release, along with "Distort", a new creation featuring some fascinating twists and turns that's sets new standards for rhythmic 140bpm invention. Mr. Itch was actually there in person too, although only as a spectator this time. In a building literally heaving with d'n'b, his decision to hang-out with the dubsteppers upstairs must be an indication of his ever-increasing affinity with this sound.

The final hour was left in the hands of White Boi, back-to-back with latest addition to the H.E.N.C.H. family, Kommonasmuck, who between them managed to fill 60 minutes almost entirely with their own productions, which seem to be coming at an astonishing rate of productivity. The thing is, all these guys cut their teeth writing d'n'b , and the comment that they all make is that writing dubstep is relatively 'easy'. This sort of attitude could be seen as slightly irritating, especially for people like me who think its actually quite difficult, but it's results that count, and they just keep firing out quality tracks at an alarming rate. Some of the new ones, like the epic string-drenched "Hard Life", are industrial-strength half-steppers of the finest calibre. Then there's the brooding bassline wobblers like "Abel Sinner" and "Manson", kicking-out some quality subsonic pressure. Their abilities have not gone unnoticed, as they are scheduled to be on the third release from Ascension, which seems to be shaping-up as a vital imprint for Bristol-originated dubstep music. These guys mean business. I'm sure DMZ was fantastic, but frankly I experienced more than enough quality shit in those three hours to keep me satisfied - and it was only a ten minute journey from my doorstep. My fantasy of a Bristol-based FWD>> community took a huge step towards reality last night. Exciting times ahead...
Posted by N.E. at 6:50 AM