THE MANY SIDES OF MRK 1

Who is MRK 1? Well, he used to be Mark One, but had to change his name for some ridiculous legal reason. He was one of the three artists featured on Rephlex's "Grime" compilation, which was instrumental in sucking an old electronica head like me back into the murky world of the underground, inspiring me to explore the fresh pastures of dubstep, which is quite ironic when you consider that he isn't actually from Croydon, or even the South of England! He's a prolific producer who seems to flit instinctively between all the major disciplines of the art. He's dabbled in breaks, halfstep, vocal grime and, maybe, has his sights set on the crossover potential of mainstream acceptance. There's a slew of new releases featuring his sure hands at the production helm, including the relaunch of "The Work Related Illness", his album with bad ass Manchester grime MCs Virus Syndicate. I reviewed the album in it's original form back in June last year. Reading back, it's funny that I suggested they should "...get it in the shops with a 'parental advisory - explicit lyrics' sticker", cos that's exactly what they've done this time, presenting the album in a way that could appeal to a more 'rap' oriented audience, although I actually preferred the original cartoon design. It had a bit more charm, I think. But it's not just the sleeve that's changed - there's a few additional tracks, including "Gun Talk", which, after the ambiguous posturing of some of their previous lyrics, seems to make Virus Syndicate's anti-violence stance explicitly clear ("You need to keep all that gun talk to yourself - real G's don't do dirt and spit on wax"). Buy the CD here, or download from Bleep... 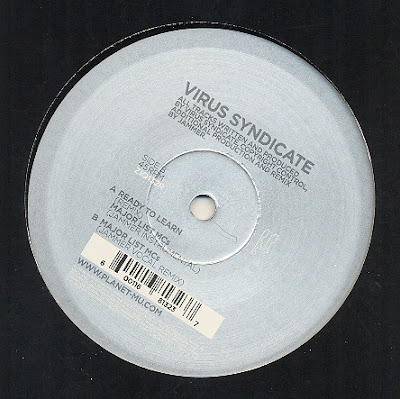 Another new track on the album is "Ready To Learn", which strikes me as a blatant attempt at cracking the mainstream, with it's futuristic r'n'b stylings and helium diva samples, which, depending on your point of view, could be seen as a homage to early hardcore or a cynical cash-in on that whole Kanye West production style. Coupled with the open-hearted 'relationship' lyrical content, it could certainly have some commercial mileage, which is probably why Planet Mu have released it as a 12" single as well, backed with a reworked vocal version of "Major List MCs". There's also a second remix 12", featuring a more stripped-back version of "Ready To Learn", with heavy rock drums offset by junglist breakbeat shuffles, plus Jammer's vocal and instrumental remixes of "Major List MC's", which take a surprisingly minimalist halfstep approach. Releasing two versions of the same 12" simultaneously is an old record company trick for achieving higher chart-placings, which adds further fuel to the idea that this is an all-out push at the mainstream. Is it actually working? I've no idea. I don't follow mainstream music much, so can't say I've noticed. "Ready To Learn" is a bloody good stab at creating a fresh spin on the 'pop song' format, though. Don't think I'm trying to knock it- I think it sounds great! Best of luck to 'em! You can buy 12" #1 here, and #2 here. 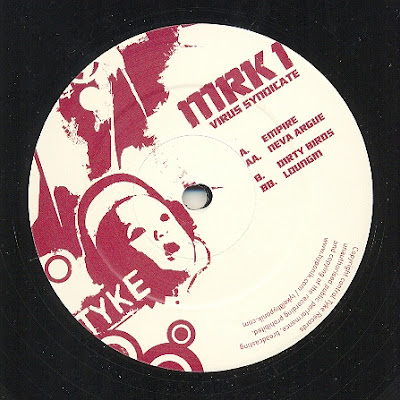 Anyone looking for a more instrumental flavour should check a couple of other MRK 1 12" releases that have surfaced just recently, the first one being a four-track EP from new label Tyke Records. It opens with "Empire", a grimey barrage of strident orchestral stabs, string section shivers, gun-totin' 'cock back' sound effects and a big squarewave bassline. "Neva Argue" features more helium vocal samples, which, on closer inspection, appear to be of Billy Joel singing his 1978 hit single "Movin' Out (Anthony's Song)". Presumably MRK found that record at the back of his mum's record collection?! Some nice woodwind arrangements, too. On the flip we have "Dirty Birds", a more stripped-back cousin of his "Plodder" riddim, laced with horror-flik scraping violin shards, surveillance camera whirrs and guttural bass. The EP is rounded-off with "Loungin", a dense forest of eastern percussion with a wailing saxophone battling with a Moog-like synth melody. Buy it here. 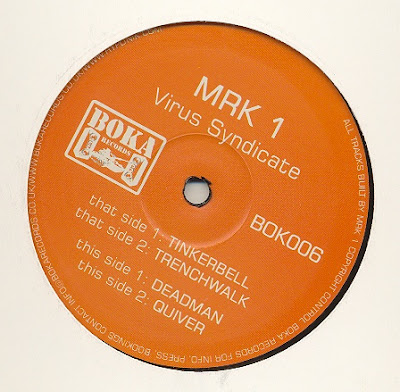 Then there's his second release for the ever-reliable Boka imprint, again featuring four instrumentals, kicking-off with the sub bass warbles and clever interplay of synth melodies on "Tinkerbell", followed by "Trenchwalk", featuring more cock-back and gun blast samples combined with latin percussion, swerving reversed snares, gloopy ocillator droplets and an 808 cowbell. Then it's back to the grimey orchestral stabs and yet more gun blasts on "Deadman". But, from a very personal point of view, the best track is saved for last. "Quiver" is a wonderfully understated combination of slinky, clinical-yet-funky 808 beats, overlaid with portentous polysynth sweeps and pure sub bass undertow that connects MRK perfectly with his Northern forebears. Yes, I hear the cold, spacious beauty of classic Bleep 'n' Bass in this track. This is my kind of 'roots 'n' future' music. Brilliant! Buy it here. 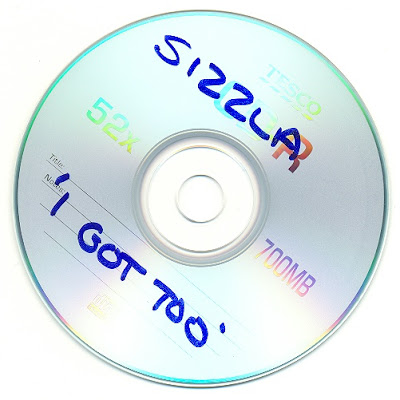 MRK is also gearing-up to relaunch his own Contagious imprint, commencing with "I Got To", a collaboration with reggae legend Sizzla. I was really surprised when a cd-r promo arrived through my letterbox. I've had no direct contact with MRK ever, and I've no idea where he, or whoever does his admin, got my address. But here it is. Once again I can't help thinking that this has some serious crossover potential, propelled by a catchy halfstep skank riddim and Sizzla's rousing chorus of "I got to smoke up the 'erbs", which could become an anthem for all the weed-smokin' kids out there - as far as I can tell everyone smokes the stuff these days! The Virus Syndicate mix is a bit more sparse and experimental, plus you get the instrumental versions as well, so there's something for everybody here! Release date for this one is 12th June.

Oh, there's also another MRK 1 EP due on Planet Mu anytime now, called "Ready For Love", but I haven't actually heard that one yet. There's just no stopping the man right now!