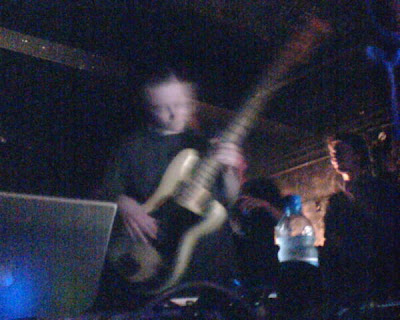 Had a wicked time at Noir's birthday bash last night. Arrived too late for Elemental's set, but Distance delivered the goods in fine style, followed by Boxcutter making his Bristol debut with a live laptop set which involved lots of tweaking with his little box of midi-controller magic (love it when he sweeps the frequencies) and occasional bursts of jazzy bass guitar (just don't mention Squarepusher, okay ;-). Awesome set. My only complaint being he didn't bring along his normal guitar and pedal board - I was hoping for some more of those delay-drone washes, but never mind. Come back soon lads - big-up the ex-rockers!

Also shouts to Bubonic, Stealth and Kymatik for some vibey 'Sludge' action in room 2 afterwards (Sludge = "dubstep/grime/gay-rage/dirty breaks/some ol skool n random shit"). Vex'd mixed with Public Enemy acapellas?! Bare madness. By the time I left, the main room was deserted, but the party was still in full swing with those guys upstairs. Big up Thinking for dropping a couple of choice tunes too, even though he was stoned out of his mind. You're all fucking LARGE. I love ya!!
Posted by N.E. at 6:06 PM