Received a couple of CDs from Stateside underground label Autonation Records recently, here's the first one... 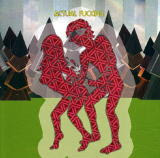 The first full-length album for three years by Cex is called "Actual Fucking" and sports a rather striking cover illustration of a silhouetted young couple in the throws of coitus - basically, he's ejaculating all over her backside. Remove the booklet from its case, and inside are eight 'true life' cexually explicit (and very well written) stories by some of Cex's friends. You wanna know about Danielle's taste for getting "fucked in the ass and pussy back and forth", or consider the unique cexual politics of three-way sex? Lot's of eyebrow raising anecdotes on offer here, although being a male I don't find them particularly arousing (us blokes only get off on pictures, right?) but what about the music?

Cex of course is a well-known figure in the US underground, having released all sorts of odd records (some of which I've actually heard, most of which I haven't) as well as co-founding the influential Tigerbeat6 label with Kid 606. For "Actual Fucking" he's taken another sharp creative turn, travelling across the USA to collaborate with various musicians who he's met during his career, including Portland experimentalists Nice Nice. The resulting collection is song-based, with an emphasis on vocals and live instrumentation - a sound that Cex himself cheekily describes as "BSSM-era Red Hot Chilli Peppers crossed with Low". Not really my kinda thing in general, so I'm probably not the best person to be reviewing it, but it certainly has some good moments, such as the muscular electric piano-driven groove of "Covington", which also features some startlingly extreme vocoder effects, and the doom bass and crunchy drums of "Chapel City", sounding a bit like Radiohead in places. The live sound is combined with subtle electronic treatments, loops and beats throughout, and concludes with an impressive instrumental called "Tucumcari", a gorgeous string-swept, trickling Fender Rhodes mood-piece. The lyrical themes, combined with the printed stories, are intended to make a stand against "the oppressive morality of the Baby Boomers". So its a concept album, then.

Available in all good music stores. Possibly.
Posted by N.E. at 2:43 PM