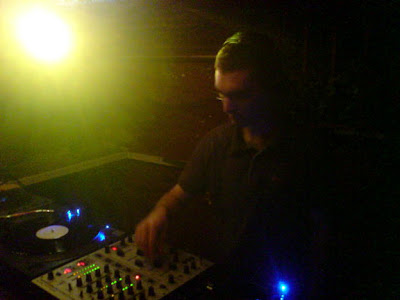 It was good to get out on the town again last night, it's been far too long! Though to be honest the Four:Twenty minimal house session in the mainroom at Timbuk2 was a bit of a let down. Too clean, clinical and functional for my tastes, I'm afraid. Even Daniel Stefanik, who I know is capable of some seriously deep, aquatic vibes, seemed content to roll out a mildly interesting set of percussive belters. I spoke to him briefly, and he seemed a really nice chap, so don't wanna diss him out of hand, but it just wasn't my kinda thing. Everybody played off fucking cd-rs or laptops and the sound was really harsh - dead digitalia with too-heavy 4/4 kick drums. The crowd was sparse and a bit lackluster, apart from one or two who looked like they'd been chemically enhanced, plus a few old ravers around my age swaying around with absent looks on their faces, as though whatever force had once gripped them had long since departed. Admittedly, my observations are based on no more than half an hour of intermittent experience, so maybe I missed the good bits. 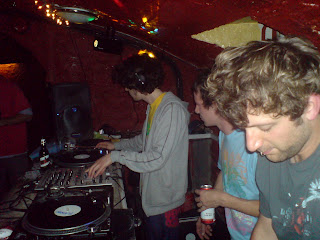 The smaller room was where it was all happening - Bristol dubsteppers in the muthafucking area ripping up the joint for a hyped little crowd of enthusiasts. Of course the soundsystem wasn't good enough but that was to be expected. Wedge, Peverelist, Komanazmuk and Gatekeeper all smacked it hard, though I think man of the match was Appleblim by a hair. A minor triumph then, but still I felt a bit deflated by the lack of 'crossover' with the minimal crowd. I saw Mr Stefanik checking Peverelist's set for a while, but generally it seemed like two separate scenes in uneasy co-existence in the same building. Or maybe that's just how I perceived it. Whatever, I might give it another go next time and see if things improve.

Big-ups to Pinch attendance! His debut album is finally due for release at the beginning of November. Watch out for my review, hopefully coming in issue 2 of Woofah magazine.
Posted by N.E. at 10:16 PM