Of course it would be far more impressive to showcase a bunch of original 12" imports, but I have hardly any. As an impoverished teenager in the late eighties with a busy social life and a clapped-out Ford Cortina to run, it made good financial sense to invest in the myriad deluge of compilations produced during that initial rush of House-mania (87-88). For an interested observer, rather than a committed scenster, they offered a good navigational aid through the mysterious and exciting world of Chicago House, even though the quality of mastering and material could be a bit sketchy (mind you, some of those imports were a bit rough on the manufacturing side too!). Still, I'd take these contemporaneous collections over any recent retrospectives any day. There's no revisionism or sense of reverence - you get a more truthful account of what was happening in the UK marketplace at that time, the good and the bad. House was Big Business and for every great collection there was a cheap, exploitative alternative, with both major labels and rogue independents rushing to make a few bucks from this new dance craze. You can't beat those sleeve designs for a pungent visual evocation of the era, either. Here's a few examples... 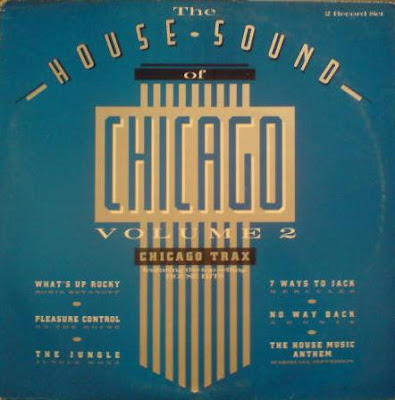 THE HOUSE SOUND OF CHICAGO Volume 2 (TRAX/FFRR 2xLP, 1987)
Starting with one from the original, cream of the crop series. I think this was the first one I ever bought, offering extraordinary value for money with it's an impeccable selection from the Trax catalogue spread over two platters - Mr. Fingers' "Washing Machine" and "Can You Feel It" (thankfully in its original pure instrumental form), Adonis' "No Way Back", Marshall Jefferson's "Move Your Body" etc etc...rendering every other collection on display here second rate by comparison. Not forgetting such gems as Virgo's "R U Hot Enough", which is a really special deep, soulful cut. Sleeve notes by NME's Stuart Cosgrove too! 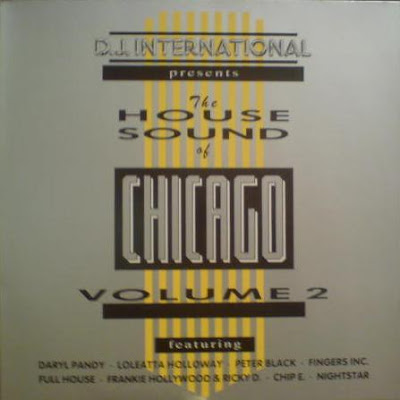 THE HOUSE SOUND OF CHICAGO Volume 2 (D.J. International LP, 1987)
Here's another collection with exactly the same title and a suspiciously similar sleeve design to the above, except this is D.J.International's version of the "House Sound..." series. I'm sure a few punters must've been confused by such flagrant plagiarism, but still this is a solid selection of vocal-based House anthems, featuring the talents of Loleatta Holloway, Daryl Pandy and Chip E. among others. 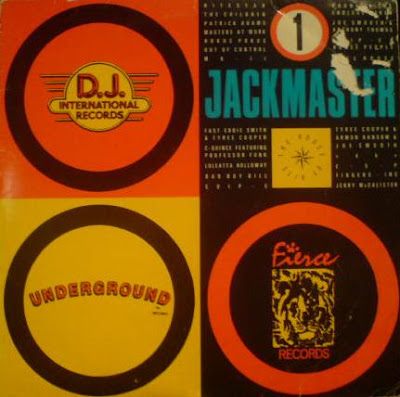 JACKMASTER Volume 1 (Westside 2xLP, 1987)
At this time the phrase 'Jack Trax' was almost as widespread as 'House' as a term for the Chicago sound. This is one of many collections to feature 'Jack' in the title and it's got a fair few gems hidden away. Volume 2's pretty good too. Reading Morgan Khan's sleeve notes you really get a sense of community, as the nation's youth embraced this new sound: "I dedicate this album to the House posses in Birmingham, Bristol, Hull, Leeds, Liverpool, Manchester, Newcastle, Sheffield, and all of Scotland...long live the beat". Amen, brother. 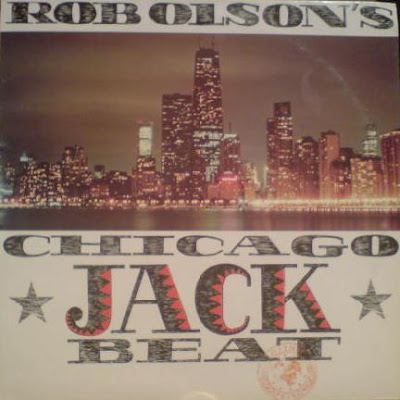 ROB OLSON'S CHICAGO JACK BEAT (Rhythm King/Mute LP, 1986)
This is actually the oldest example on display here, from '86, although I came across it much later. I have no idea who Rob Olson was, other than his 'Executive Producer' credit, and the sleeve doesn't have much to say about this selection of second division and nearly all forgotten producers. But it's quite listenable. 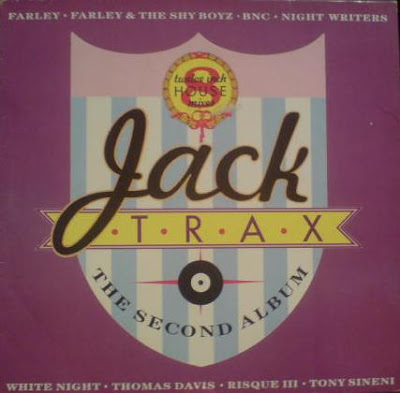 JACK TRAX - The Second Album (Indigo LP, 1987)
Another no-nonsense collection of undistinguished, long-forgotten trax, including a nice Frankie Knuckles number. But Thomas Davis' "Don't Hold Back" is weirdly lo-fi, like it was made in a bedroom and then dubbed onto cassette about twenty times. Mad tune, though! 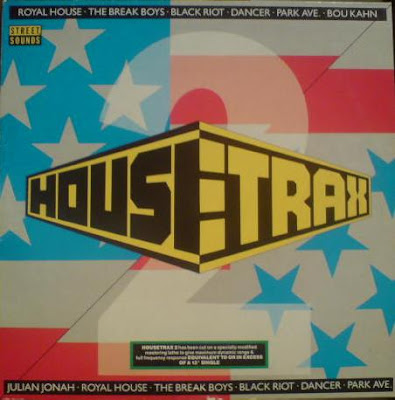 HOUSE TRAX 2 (Streetsounds/Westside LP, 1988)
Another from Morgan Kahn's Westside empire. The ones that really leap out are those Todd Terry productions - Black Riot's "A Day In The Life Of" especially, with that huge riff that sends an instant reflexive spasm of pleasure through the cortex of anyone of a certain age. 'Proto-Rave', I'd say. Again, Kahn's impassioned sleeve notes give some sense of the momentum of change, as he describes being "overwhelmed with demo tapes from bands and artists from all over (the UK)". In an age before everyone was connected via the internet, Kahn was using the record sleeve medium to communicate and inspire a groundswell of pro-activity; his sermons read almost like blog posts. 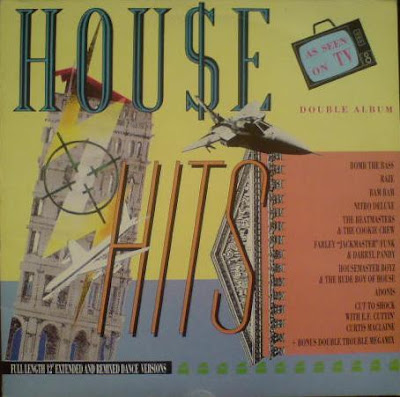 HOUSE HITS (Needle Records 2xLP, 1988)
The 'As Seen On TV' slogan in the top right corner gives an indication of how omnipresent House had become in the UK mainstream. This is basically a cash-in collection, but actually pretty good, with a solid selection of top-drawer hits like "This Brutal House", "Jack The Groove", "House Nation", "Rok Da House" (featuring The Cookie Crew) and, er, Bomb The Bass' "Beat Dis", which just shows how vague the lines between 'pure' House and more sampledelic hip-house could be for the average British punter back then. They didn't need fucking micro-genres back in them days! Side 4 is a 'House Megamix' - remember those things? Nice gatefold packaging, with 'History Of House' sleeve notes by Blues & Soul's Malu Halasa for the uninitiated. 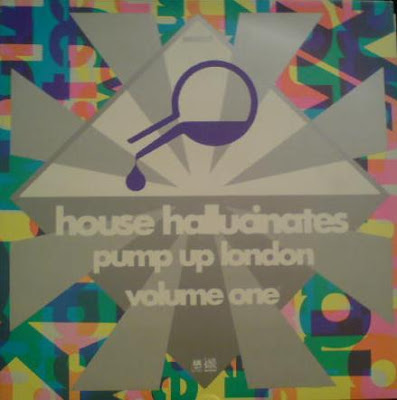 HOUSE HALLUCINATES - PUMP UP LONDON Volume One (Breakout/A&M 2xLP, 1988)
Of course, by 1988 'Jack Trax' were already old news - it was all about the Acid sound now. Such was the media furor over of those Ecstacy-feuled illegal raves that even my grandad had heard of Acid House. But I've yet to come across a contemporaneous compilation that truly represents the best, most lysergic, of those early Acid tunes. This one comes closest - at least it features genuine Chicago artists and includes Phuture's original full-length "Acid Tracks". Not sure about the sleeve design though, especially the migraine-inducing gatefold spread. 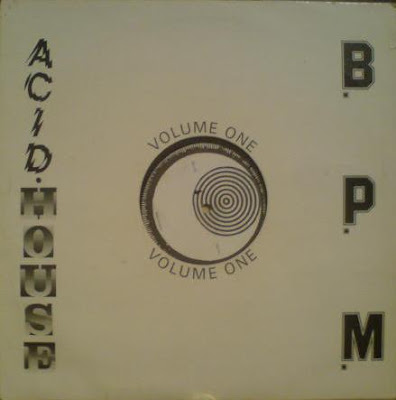 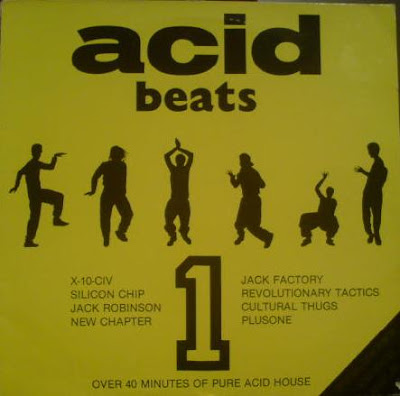 ACID BEATS 1 (Warrior LP, 1988)
The downside of the Acid explosion was the wave of cheap, nasty cash-in compilations, on tiny labels, produced by UK copyists with only the vaguest notion of what they were doing. The above two examples are at least sort-of legitimatised by being overseen by Tony 'Moody Boys' Thorpe, one of the early pioneers of the UK scene. All the tracks on these records are by artists you've never heard of, in fact I wouldn't be surprised if they were all knocked-out by Thorpe himself for a quick buck (one track at least is credited to The Moody Boys). There's some amusing stuff, like "Acid Bitch" with it's put-on Americanised twang, trying sound all erotic like Jamie Principal on "Baby Wants To Ride", but just ending up sounding awkward, gangly and a little bit seedy. I like the 'liquid dope' lyrics, and it's a fairly authentic sounding backing track, but compare this with that 'Newbuild' material that Gerald Simpson was doing with 808 State in Manchester at the same time and there's really no comparison. 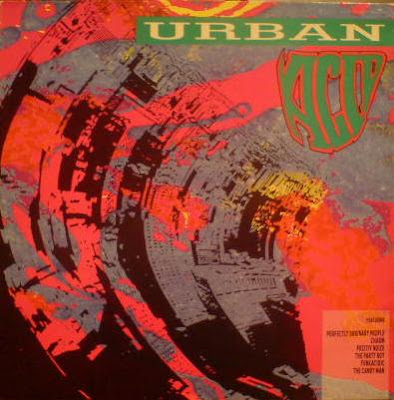 URBAN ACID (GRC/Polydor LP, 1988)
On a similar tip to the above, but this one features early productions by Pozitiv Noise aka Martin Freeland, who was responsible for many releases under various guises over the following years. It's quite a polished collection...perhaps too polished, lacking the enforced simplicity of the impoverished Chicago sound. I don't think he was using the right tools - there's that bland sheen of FM synthesis and slick studio mastering pervading the whole thing. It's too bloody professional! "Funkacidic" is fun though, featuring a big Moog-like synth solo, cocktail-jazz piano flourishes and vocoder vocals. You do at least get one slice of genuine rough Chicago 303-led acid, care of Bam Bam's "The Twighlight Zone".
Posted by N.E. at 12:36 PM