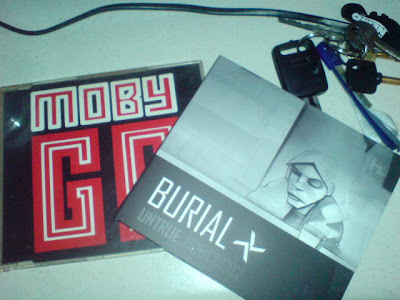 Coming back briefly to riff on that Moby comparison, I was listening to the Burial album (again!) today, and was suddenly struck by "Raver"s more than passing similarity to Moby's 'classic' 1991 hit record "Go". Something about the melancholy soundtrack strings (stolen from Angelo Badalamenti's "Laura Palmer's Theme" on the Twin Peaks soundtrack) offsetting the ecstatic vocal samples, making them sound a bit forlorn, and the slightly viscous nature of the 4/4 rhythm track. Perhaps some subliminal childhood memory of "Go" leaked into Burial's consciousness...or maybe it's just a coincidence...or maybe Burial really is Moby!

For those too young or too stoned to remember "Go", I should point out that I, erm, really liked it at the time. Remember this was back when nobody really knew anything about Moby; we had no reason to despise him then. It was just another great dance tune. I made a lickle discomix of the two to illustrate my point...

I just bashed this off about twenty minutes ago on the cd decks, and its a bit sloppy. Very sloppy, in fact. In a revisionist measure, I edited out the shite piano solo in the middle of "Go" cos it's the most dated aspect of the track. If anyone out there fancies doing a proper discomix version I'd love to hear it!
Posted by N.E. at 9:41 PM