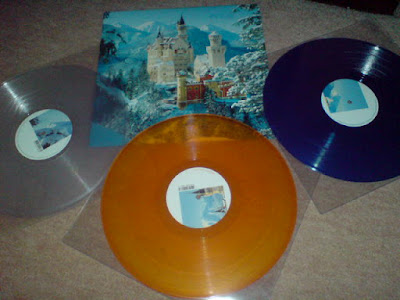 I read a comment from someone (can't remember who or where) suggesting that the current excitement about Burial is akin to that enjoyed by Stefan Betke when he unleashed those early Pole albums at the end of the '90s. It seemed a strange comparison at first, but it kinda stuck in my head and then I began to think it might be an accurate statement. I can't really remember what the critical reaction to Pole was at the time (I wasn't even online back then!) but I can well imagine, in that period of pre-millennial tension, that those crackly, distressed dub emissions must've felt like some sort of last word on the whole deep/dub techno thing, the point where the Berlin sound finally dissipated in a puff of reverberation; it's myopic, grainy, lo-fi textures as poignantly wounded as anything that Burial offers us today. It wasn't the end of anything, of course. In fact it helped spawn a whole new style of clicky, messed-up tech-house, and deep/dubby techno is currently thriving. Nothing ever really ends. The cycles just keep going round.

These days, Betke has moved on somewhat. The latest Pole album, "Steingarten", retains some of the distressed textures of old, but the overall sound is crystal clear and he's not afraid to use proper drum sounds now, rather than the unpredictable spitting and popping of a malfunctioning filter! It's an 'interesting' album, in the chin-stroking sense - an album to admire and appreciate, but not something you can really cherish like his earlier work. It's too muscular, too self-assured, too near-focus for a truly immersive experience. With the notable exception of "Dusseldorf", most of the tracks operate at a hip hop tempo, so it's not even that useful for djing with. Perhaps mindful of the lack of dancefloor contenders, Betke commissioned a series of remixes, released on a series of three coloured 12 inchers. The first two installments focus mainly the more minimal side of tech/house, with some solid, useful reshapes from the likes of The Mole, Dimbiman and Thomas Melchoir, though I couldn't help but be a little disappointed with Mike Huckaby's remix of "Dusseldorf" - sure it's got that deep, dubby Detroit sound I like right now, but it feels a bit lazy, like it needs a bit more development (Huckeby's recent "My Life With The Wave" 12" is a far stronger display of his talents).

But it's the third installment that really stands out, with Betke hiring the talents of two of the UK's hottest visionaries (who just happen to be friends of mine!) Tom 'Peverelist' Ford and Sam Shackleton. Peverelist's remix of "Winkelstreben" completely re-imagines the original's potential, and is one of the most complex arrangements I've heard from him yet - a constantly shifting matrix of rhythm and texture that reveals more detail the more you listen to it. Unbelievably, Tom told me that Betke didn't actually like it at first, but after a week he'd been seduced by it's charms. When dealing with music at such an advanced level, sometimes you need a little time to acclimatise. As for Sam's "Achterbahn" remix, well...what can I say? It's fucking awesome! Gliding on a warm, cushioning bed of sub bass, the beats are as unique as ever, but now with added processing power - the snares and percussion glistening in a fine spray of filtration. I think this might be the single most impressive piece of work I've heard from Sam so far; clearly he has no intention of going off the creative boil anytime soon. Recent sightings by Martin and Derek confirm his status as the most innovative dubstep maverick on the block, and I can't wait to hear what else he's got cooking in the lab.
Posted by N.E. at 10:04 AM