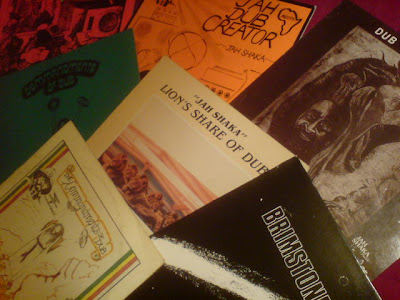 John Eden reports on recent Jah Shaka session. Funny how John chides himself for not having witnessed the great man for five years...I've never seen him ever! One of those things you hope to witness before you (or he) dies, but I never hear about them until after the event. Guess I move in the wrong circles/check the wrong forums, but then I'm only a casual reggae fan afterall. My relationship with Jah Shaka is entirely through the records, though unfortunately not any of those insanely expensive singles, just a handful of the standard '80s albums that I've picked up over the years. Occasionally, when I have the house to myself, I'll crank up the stereo to breaking point with these babies. One of the things I notice, particularly with the first "Commandments Of Dub" album, is all those future-echoes of Jungle leaking out from the extraneous sound effects and vocal utterances that have been sampled and recycled...though it's not always easy to place where I've heard the samples. But that's just one reason for revering Shaka and his towering influence on British bass-culture.

Will someone please forewarn me if he's ever passing through the West Country??!!
Posted by N.E. at 9:25 PM