Imagination: Distinctive London-based trio, who created a unique blend of soul and dance music. Leee John (vocals), Ashley Ingram (vocals, instruments), Errol Kennedy (drums). One Of the most original British acts of the early 1980s, they were fronted by a charismatic lead singer.

What a great pop group, eh? Did you know they were one of the first acts to use the Roland TB-303? They may not have unlocked it's acid-potential, but listen to that distinctive swerve on the bassline, achieved with the 303 sequencer's unique 'slide' function. Remember all those other hits - "Body Talk", "Music & Lights", "In And Out Of Love" and "Flashback"? (as sampled by Boards Of Canada on early unreleased track "We've Started Up"). Yeah, proper pop from the days when pop mattered.

That last sentence is of course nonsense. Pop matters today as much as it ever did, it just doesn't matter to me anymore. Retro-pop matters to me because it reminds me of days gone by, when things like that were far more important to me. Lot's of stuff was far more important to me when I was a kid, and I think that's true for a lot of people. We spend our adult lives indulging in all sorts of activities buying loads of stuff and imbibing substances trying to get that feeling we had when we were little, when the world was all new and exciting. I've never bought a record that ever gave me as big a thrill as, say, getting that Action Man tank for Xmas when I was five years old. I see my own kids today getting so incredibly excited by the most mundane things like toy trains, or football trading cards or Carrie & David's Pop Shop. The items I own that I truly cherish are those bits of bricker-brack I've had since I was little, cos they resonate with those old feelings of heart-stopping excitement, which occasionally I might feel in my heart for just a flickering moment when I look at those old talismans. There's nothing more important than having a good childhood, I reckon.

But I digress. Let's get to the main thrust of this post - another charity shop find, in near mint condition, still in original shrink-wrap, for a mere 49p... 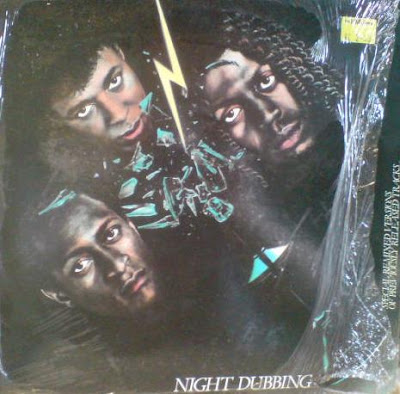 Did you know Imagination made a dub album? I didn't until I found this. I can quite happily listen to a reggae dub album without having heard the original versions, though it does sometimes concern me that I'm not really appreciating the engineer's art because I don't know the original song. In pop terms, it would be like listening to The Human League's "Love & Dancing" remix album without having ever heard "Dare", which would be an insane thing to do, surely? As I sort of suggested in my Dennis Bovell post recently, dub's transformative powers can sound most shocking when applied to music you're already very familiar with. That sense of disruption to recognised song-structures creating a destabilising effect in the mind.

Imagination's "Night Dubbing" is interesting for this reason, but also as an unusual early example of dub strategies applied outside the context of reggae music, feeding into the mainstream. Mixed by Tony Swain, Steve Jolley and Richard Lengyel (apart from "Changes", reshaped by Larry Levan in NYC), it's a collision of Jamaican-style echo dubbing and disco-style re-editing that picks all those hits apart and re-arranges them in more abstracted form, fragmenting the vocals and destroying the song narratives along the way. Hardly avant-garde by today's standards, but it must've sounded quite weird in the pop landscape of 1983. Even the sleeve image seems at odds with Imagination's usual upfront image, with the boys peering moodily from the shadows.