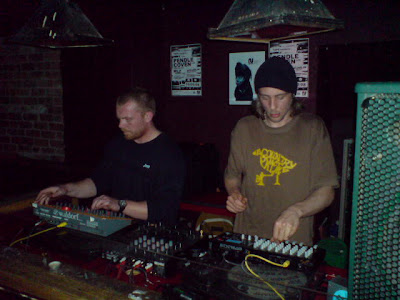 Had a great evening at Tape last night. Me and Doppelganger arrived early when the place was still empty to chill with some deep house vibes from resident Taper Richard Carnage. Then we witnessed Patchwerk Man's first public engagement in over a decade. The old codger gave a good account of himself, with an uncompromising set of driving minimalism that built to a crescendo of droney/noise-based intensity. He brought along some fresh exclusives on cd-r but the management hadn't laid-on any cd decks for him so he just span vinyl, and even managed to entice some of the early arrivals up onto the dancefloor. The young lady who kept blowing him kisses made him very happy. Let's hope he gets a few more opportunities to play out soon, eh?

Then came the main event. I'd been tantalised with rumours of a full-on live hardware set from Pendle Coven but, due to some technicals, they settled for a stripped-down laptop approach with a midi-controller and some kinda Waldorf rack-synth. It was all going well and the set was just starting to get into it's stride when the Coven were beset by further technicals. The laptop decided it wasn't gonna play ball anymore and started glitching the tunes (in a not nice way), so the live set went out the window and Coven's dj Miles (MLZ) hastily broke out the vinyl and proceeded to tear the roof off for the next hour and a half. It really was an exceptionally good selection that mixed-up the best of the current Techno scene with old classics like "Energy Flash" and occasional bits of proto-dubstep (Artwork, Search & Destroy, etc - "the best stuff", according to Miles). At one point some mystery grime MC turned-up with his own microphone, jacked it into the mixer and proceeded to spit a few bars just as Miles went into a particularly intense broken/twisted section. Everyone got a bit over-excited and the levels were all in the red and the soundsystem was screaming in pain and...it was just one of those wicked moments when everything goes a bit weird and unpredictable and might all explode in a mess any second, but just manages to keep the shit together.

Appeblim followed, though I must admit I missed most of his set cos I was outside in the 'smoking garden' (actually a cramped, dingy alleyway at the side of the building) chatting away with Pendle Coven whilst Miles was treating himself to a well-deserved spliff. What a lovely couple of geezers they are. Although they've only come to international attention in the last few years, they've been active on Manchester's underground scene all through the nineties and they're a proper pair of old ruff diamonds, so full of enthusiasm and love for what they do. My kinda people! Watch out for their album coming out on Modern Love in a couple of months... 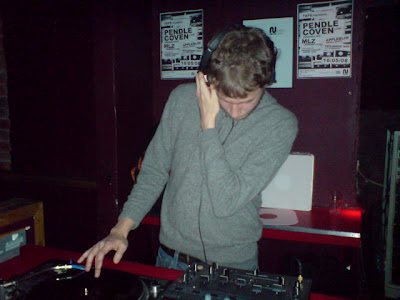 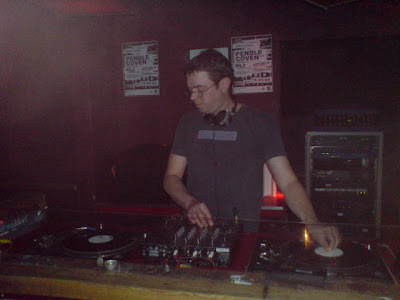 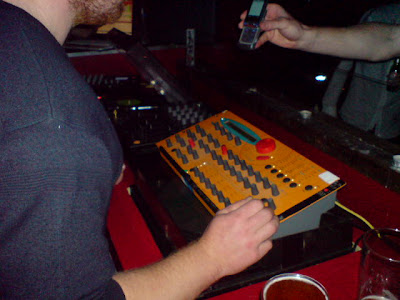 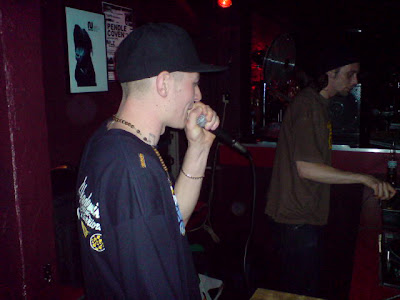 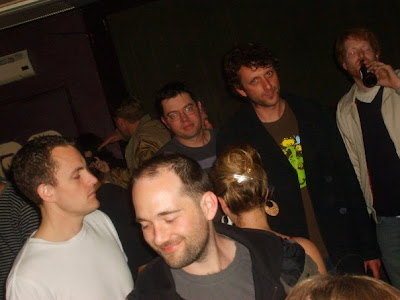 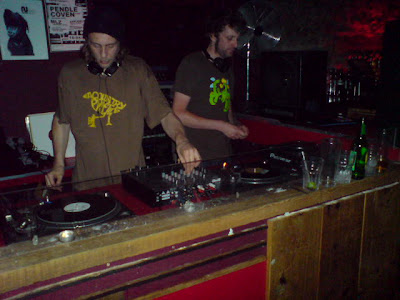 MLZ Handing Over To Appleblim 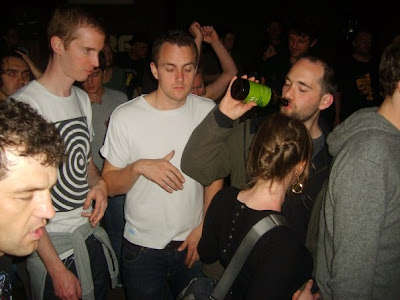 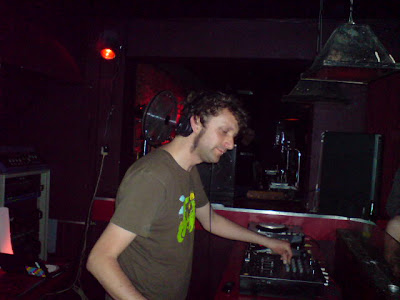