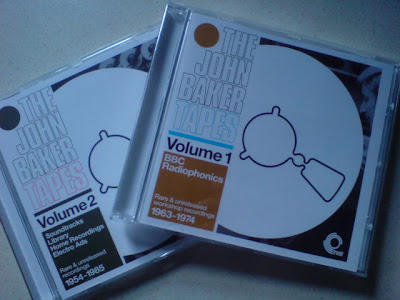 Now here's something that's long overdue: a two-volume anthology of recordings by the late, great John Baker, undoubtedly one of the sharpest musical talents under the employment of the BBC Radiophonic Workshop in it's 1960s/70s heyday. Whilst the music of his then colleague Delia Derbyshire has gradually risen in status in recent times, Baker has remained until now a fairly marginal figure, perhaps owing to the lack of available products featuring his work. He was one of the 'big three' (along with Derbyshire and David Cain) who appeared on "BBC Radiophonic Music", the classic album first issued in 1971, subsequently re-issued on CD in 2002 and also issued as a 10" vinyl set by Rephlex in 2003. And, like Derbyshire, he was responsible for a piece of music that will be instantly recognisable to anyone of a certain age: the rapidly ascending/descending cascade of notes used to sign-off John Craven's Newsround for over a decade (originally the coda to a longer piece called "New Worlds" as featured on the above-mentioned album). Although there are a few other Baker gems scattered on a handful of other compilations, that's pretty much all there is available to the public until now, so hopefully these collections from the ever-reliable Trunk Records will help to inspire some fresh interest in his work. In fact I reckon this is the most important historical document of forgotten British electronic innovation since Paradigm Disc's sensational Daphne Oram "Oramics" anthology last year.

John Baker was a talented musician imbued with an instinct for popular, accessible arrangements combined with a surgically precise skill with tape editing that enabled him to make some truly dazzling music. Back in the sixties, before the BBC invested in analogue synths, he was taking found sounds from everyday objects, recording them onto tape, then speeding/slowing the tape to change the sound's pitch, then editing a multitude of individually tuned snippets of tape together to form a rythmic and/or melodic pattern, which would then be mixed with other similarly created tape patterns and sometimes live instrumentation, to produce finished compositions which sound more like they'd been arranged using modern digital samplers and sequencers. So for instance, he'd record the sound of a wooden ruler being twanged against a desk and turn it into a bassline, 20 years before the Art Of Noise did it with a Fairlight on their first album. You just wouldn't think it possible to create such naturally flowing musical patterns with the primitive tools at his disposal. Whilst Derbyshire might've had a deeper philosophy when it came to textural detail, Baker could out-edit anyone; the sense of groove and swing he managed to achieve made everyone else sound clunky and metronomic in comparison. But that populist instinct could sometimes make his work seem slight, mere jingle-fodder, despite the mind-boggling feats of engineering that accomplished them. Yet he was very capable of producing fascinating, occasionally chilling, works of ethereal beauty too, and these Trunk CDs skillfully navigate between the two extremes of his muse.

Volume 1 focuses specifically on Baker's work at the Radiophonic Workshop during the period 1963-1974 when he was employed by the BBC and features an impressive 49 tracks of long-lost jingles, theme tunes and incidental music. There are many examples of Baker's familiar chirpy, effervescent style, including "Big Ben News Theme", "Places For People", "Tom Tom", several idents for Radio Sheffield and Radio Nottingham and a beautiful watery rendition of "Barnacle Bill", which in another incarnation became the theme tune to Blue Peter. These pieces show Baker at his most Utopian; optimistic visions of the future that still sound rousing and life-affirming. Admittedly some of the more straight-forward piano-accompaniment pieces like "Look And Read" and the oompah military band style of "Sling Your Hook" do start to grate after a couple of listens, but at least they provide a useful background context - an insight into the sort of middle-of-the-road conservative work that Radiophonic employees had to undertake from time to time.

Occasionally we get to hear Baker personally explaining his methods, such as discussing the creation of the "Reading Your Letters" ident for Woman's Hour. There are several pieces that amply illustrate Baker's love of jazz, particularly on "The Caves Of Steel" and "Building The Bomb", both arranged for live instruments including double bass, cornet and vibraphone, whilst "Vendetta" combines bubbling tape sequences with live drums and solo saxophone. Elsewhere, "The Tape Recorder" brings an Eastern flavour with tape-manipulated Sitar sounds, "Submarine" displays Baker's ability to create eerie, ambient textures in the Delia Derbyshire mould, and "Diary Of A Madman" is a nightmarish assemblage of drones and swooshes. Perhaps the most obvious precursers to today's electronic dance music are "Trial" with it's hypnotic bass sequence and the brilliant theme to "Dial M For Murder" with a rhythm pattern that almost anticipates early Autechre. All told, this is yet further proof of the Workshop's ability to create impossible, otherworldly soundscapes for a mass audience, and the reason why they were probably the most subliminally influential group of electronic artists this country has ever produced. I'd take any of Baker's 40-year-old cues over the nondescript preset midi-mush that the media pipes into our homes today.

Volume 2 collects a further 39 recordings made outside the Workshop from 1954-1985. Whilst there are perhaps one too many jazz-lite piano pieces for my taste, this is more than compensated by the generous examples of his work for the Southern Library (recorded under the alias John Matthews to avoid contractual problems with his employers at the BBC). "Electro-Aggression" surfaced on Luke Vibert's "Further Nuggets" compilation a few years back (in stereo, rather than the mono mix used here), but otherwise those original library LPs were so rare as to be virtually impossible to locate, so it's fantastic to finally hear more extracts from the series, especially as they represent some of his most imaginative, experimental tape music.

There are also several examples of Baker's freelance advertising work, providing electronic jingles for products like Brylcreem, Omo washing powder and Girobank, which inevitably bring to mind (and compare favourably with) Raymond Scott's Stateside commercial repertoire from the same period. Then there's "John Baker Dubs", an all-too-brief unfinished piece from the mid-'60s of remarkable prescience- a cluster of echo-dappled organ chords over a surprisingly funky drum track - imagine (if you can!) lounge-keyboardist Klaus Wunderlicht remixed by Basic Channel.

Regrettably, by the late '70s Baker was fighting a losing battle with alcoholism, which had already cost him his job at the BBC. His final library recordings sound like they're drifting into a nebulous fog of dank, distressed atmospheres and almost unbearably tense ripples of cryptic tension. The spring had gone out of his step, the Utopian splendour of his classic work seemingly drowned in a bottle. But still these final pieces retain a strong voyeuristic attraction, spooked-out snapshots of a personality in disintegration - the Radiophonic equivalent of listening to Nick Drake's "Black Eyed Dog". But the last known recording he made, a simple piano piece recorded at home in the 1980s, seems to mirror his very first recording, a 78rpm acetate from 1954 that closes the disc, that suggests Baker had come full-circle, and maybe even found some contentment in his troubled personal life. The penultimate track is an obituary broadcast on Radio 5 at the time of Baker's death in 1997, read with superhuman levels of professional detachment by his brother Richard Anthony Baker, who also contributes a very personal account of John's brilliant, tragic life in the sleeve notes. Together, these two volumes paint an unmissable portrait of an electronic pioneer who's been overlooked for far too long. Get to know.

Volume 1 is released at the end of July, with Volume 2 following a month later. In between, there's a vinyl edition that collects all the highlights. For more info check the Trunk Records website.
Posted by N.E. at 4:00 PM