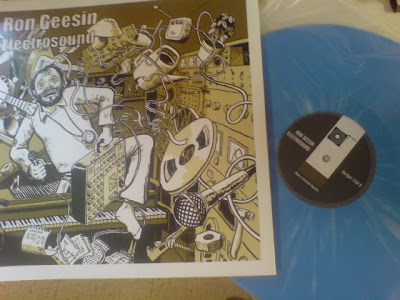 That 'tiny trickle' of Pre-History British Electronic Music that Woebot highlighted a couple of years ago still hasn't been satisfactorily exhumed for the reissue market, though occasionally a few things do come through (see previous post, for instance). Having already made an invaluable contribution with the Delia Derbyshire/Brian Hodgson "Electrosonic" reissue (which I reviewed here) Glo-Spot Records returned this year with a second gem from the vaults of KPM Recorded Music Library - in this case Ron Geesin's "Electrosound", from 1972.

As before, it's a more-or-less faithful reproduction of the original album, but on sexy coloured vinyl, with a new cover design. So now we have a brilliant cartoon (by Geesin's son Fraser) depicting our hero clambering from the guts of a piano clutching an EMS Synthi-A and a microphone, literally under attack from a multitude of instruments, tape spools and household objects as he fights to regain control of the studio (though the photo on the back cover, showing his immaculately neat 'n tidy work area paints a very different picture). This one's a gatefold sleeve too: open it up and you get sleeve notes from Geesin himself, explaining how he became involved with KPM and describing (as far as his memory will allow) how each track was created. Is that a good thing or a bad thing? Do we need to know how that scratchy metallic rhythm on "Electric Barbed Wire" was realised? (de-tuned banjo played through Synthi's ring-modulator, in case you were wondering) or should we be left to wonder how those ghastly sounds like lost spirits in torment were achieved on "Duet For Choir And Tunnel"? (shouting into a piano, recording only residual resonances, fed through tape delay). On balance, I'd prefer to know the facts and it's interesting to note how many of these electronic pieces started life as acoustic sounds before Geesin worked his dark magic on them.

Listening to the unbridled, playful sonic exploration on this record makes me hungry to investigate more of Geesin's music, having only ever heard barely a handful of other examples of his work before now. He has a discography listed at his website (including Electrosound Vol.2!) but nothing you could ever reasonably expect to come across at an affordable price. So anyone out there with an interest in these matters should grab a copy of this one whilst they can. It's a limited edition, and already getting scarce, but looks like there's still copies on sale at Norman Records. Quick! Hurry now!!

(...and fingers-crossed that Glo-Spot will continue to unearth more Prehistorical Britronica in the near future...).
Posted by N.E. at 8:46 PM