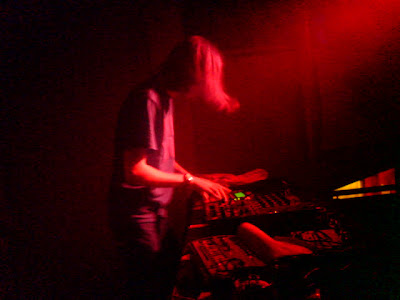 Friday night on the waterfront in central Bristol. Many years ago this would be a normal scenario for me, going out after work and getting pissed with workmates on a mellow summer's evening. But since the area's been redeveloped I hardly recognise it. It's like stepping into another world. Doppelganger and I have hardly sat down when a fight breaks out nearby. A throng of lager-louts and girls in hot-pants and stilettos gather to watch. I feel middle-aged. Somewhere in the distance I see Dub Boy wandering by holding a plastic carrier bag, presumably depositing Ruffnek Discotek flyers in bars - oh, the glamorous life of the underground club promoter. We drain our glasses and make our way across the foot-bridge to the other side of the waterfront, where it's much quieter and dimly lit. Entering my old haunt The Shakespeare pub, I'm relieved to see that the place has hardly changed in the decade or so since I last patronised it. The clientele is a little older and less belligerent and I instantly feel comfortable again. Another beer and some good conversation in our darkened little corner...I could settle in here for the rest of the evening, especially as I'm constantly aware that this might be one of the last times I spend in the company of the Doppelganger before he splits for a new life in a new town. What little nightlife I currently experience will be much poorer without him.

But then it's time to hop across the road to the The Warehouse, where those nice people from Kingpin are putting on a party with DMX Krew headlining. Thanks to Ed's generosity, we enter without paying door tax. The music's not great at this point, but we find Ed and local Under_score dj Placid in a quiet corner downstairs and sit down for a chat. Ed's gear is already set-up on stage, but he wisely keeps the TB-303 at his side (in it's original plastic carry-case). Then Placid heads for the dj booth and as soon as he steps up to the the decks the vibes improve dramatically. Admittedly the first half of his set is a mixed-bag of nouveaux acid, deep house and dubby disco but for the last half hour he breaks out the proper oldskool shit and suddenly (combined with the lazor-lights and dry ice) it's 1988 all over again, which sets the tone nicely for Ed's live set. We drain a couple of Red Bulls to fortify ourselves for the coming hour's exhertions and join the throng of amiable bohemian clubbers as Ed presses 'play' on his MPC.

Imagine the entire mid-late '80s electro/funk/acid diaspora sped-up to 135bpm and compressed into an hour of relentless beats, bass and hooks, liberally peppered with classic samples and musical quotes that bring flashbacks of Kraftwerk, Simon Harris, Micheal Jackson, Steve 'Silk' Hurley, Pet Shop Boys, Prince and Model 500. Occasionally Ed hypes the crowd on the mic, pitching his voice down to a guttural Phuturistic growl or up to a helium diva squeak, or else politely asking if someone could bring him a glass of water (about 5 people do so in less than a minute). He rinses the 303 - it's beautifully clean, undistorted signature squiggles sending ripples of pleasure through the crowd. Later he gets on a ravey tip with bustling breaks and big bombastic stabs that make me flash on Bizarre Inc., T-99 and early Prodigy, just edging into the '90s. I detect little or no sonic innovation, just sheer exuberant celebration. Lost in music, feel so alive. Dancing With Tears In My Eyes. It's fucking great.

Ed kinda blows it at the end. He decides to sing us a song, in this case 'The Glass Room', one of his old classics. But it's heavily reworked and Ed's gruff, un-vocoder'd voice fails to touch me. Where before he sounded like a clinically depressed Roger Troutman, tonight he just sounds like a karaoke Trent Reznor. But that doesn't stop the crowd baying for an encore, and Ed sees us all right with a tasty cover of "Autobahn" (replete with blippity-blip Casio loops) even though he forgets the lyrics at one point. It was truly a pleasure to witness. Come back soon, mate - you made an old raver very happy.
Posted by N.E. at 8:51 PM