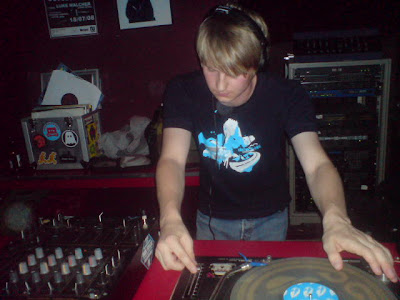 The Smoking Ban has messed things up. People come to clubs like Tape because they're into their music, but the primary biological need to feed their nicotine habits overrides the less-urgent desire to dance to some nice tunes. So they head for the smoking area outside the club, light-up, then get involved in conversations with other smokers, which can end-up lasting for half an hour or more. The net result being that they spend more time outside smoking and chatting than inside checking the sounds they came to hear. This realization came to me in a flash last night as, once again, I found myself fighting through a crowd of smokers to try and squeeze back into the building, to a near-deserted dancefloor. Just one more reason to give the damn fags up.

To be honest, even when I was inside the club I spent most of the time in conversation, shouting in people's ears, fighting against the PA's volume; the music almost getting in the way of my social life. Maybe it's because I haven't been out as much recently. I bump into people I haven't seen for a while and there's lots of catching-up to do. I'm a sociable person. I had a really good time, just talking to people. The fact that most of Luke Malcher and October's dj sets were completely lost to me is an unfortunate by-product of this situation. Someone jokingly asked me where my notebook was. I truthfully answered that I've never written notes when I'm out clubbing. When writing these so-say 'reviews' I just rely on the aura that still lingers in my mind. An impressionistic afterimage, rather than specifics. I seem to have lost interest in the trainspotting aspect of track I.D.'ing. But maybe I'm not the only one like that. I don't hang around drug-driven scenes. These aren't frenzied crowds, 'on one', united in an ecstasy of pills 'n beats. These people wander in and out of the music. They dance enthusiastically for maybe twenty minutes than wander off for a chat and fag, then come back to the dancefloor an hour later. This may be Underground music, but it sure ain't a Hardcore scene. It's mellow, easy going. Without chemical assistance, Minimal/Tech/House lacks the kind of hooks required to sustain the attention levels for very long. After a while, your mind starts to wander. So you go and do something else for a bit. The music becomes a high-volume ambient backing track to a social occasion. So what? In club culture it's the clubbers themselves who are supposed to be the stars of the show, and last night they provided great entertainment value.

So what about Headhunter? Oh, he was on good form as usual. I reckon I managed to stay focused on at least 25% of his set, which was exceptionally good going (it would've been more but, y'know, people kept coming up and talking to me). Rather than a showcase of his own productions, Headhunter had his selectah head on, starting out quite techy-minimal, then moving into deep-dubby, before breaking-out the cd-rs for some dubsteppy exclusive shizzle. All good, but don't ask me for specifics. Right now I'm just surfing the sine waves, cruising at high-altitude, occasionally dipping below the clouds for a quick look around, then floating off again. Bare with me...
Posted by N.E. at 12:19 AM