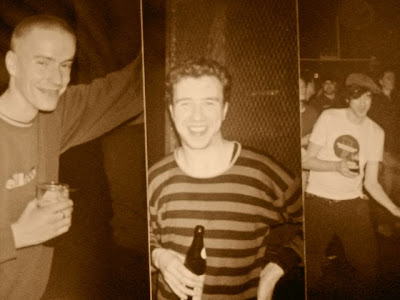 Thursday, March 10th, 2005. A small crowd gathers in the backroom of The Croft in Bristol for a Context 'dubstep special' - a rare opportunity to witness some seriously exclusive dubplate action outside the confines of the scene's minuscule Croydon heartland. Presiding on the decks: Loefah of DMZ infamy, back-to-back with Skream, a young almost completely unknown producer making his first appearance in Bristol. This wasn't the first dubstep event here, but it was my first, and it had a major impact on me - I wrote about it here.

Context was an occasional event run by a local dj and early dubstep adopter called Pinch (above, left). I'd corresponded with him previously by e-mail but this was the first time I met him in the flesh. It was also my first meeting with Shackleton (above, centre) and Appleblim (above, right), who were at this point simply keen followers of the scene, although I was aware that they were working on some music of their own, having heard a cd-r of their projected first Skull Disco release "I Am Animal/Mystikal Warrior". It was an exciting time, but the excitement was all generated by the music coming out of Croydon; there was no inkling yet that Bristol would develop it's own sound, or that these people I had just met would go on to have such a huge impact on the international scene.

Of course, there was one other notable character absent that night: Tom Ford, soon to become widely known as 'Peverelist', was away and unable to attend, although I'd known him for a couple of months already, since becoming a regular customer at Rooted Records where he worked. He too would subsequently become a hugely respected producer and dj.

The funny thing is that, for a little while in 2005, I was probably more 'famous' than any of them, but as their stars have ascended, mine has dwindled, and I blame no-one but myself. I've spectacularly failed to consolidate on the blog's popularity, in fact I've been actively distancing myself from the scene which I used to be a focal point of, plus I've found it increasingly hard this past year to balance the demands of earning a crust and raising a family with my 'hobbies' (blogging, clubbing, djing, producing, etc). I honestly intended to finish this blog forever, rather than let it limp-on as a mere shadow of it's former self, but here I am once again, tapping furiously on this bloody laptop when I should be getting on with something more 'important'. Why? Well basically because people have been sending me stuff. Which people? The ones mentioned above. The people who have completely outgrown any publicity a lowly blogger like me could give them. They don't need me anymore, but they haven't forgotten me, and I'm deeply touched by that fact. And that's why I back here: to remind any straggling readers about the excellent music these people are still releasing.

First came a 12" white label of the latest Peverelist offering on Punch Drunk. The a-side is called "Clunk Click Every Trip", a title which might be suggestive of psychedelic undertones, though if memory serves it was actually a catchphrase for a television advertising safety campaign about wearing seatbelts, presented by Jimmy Saville many years ago (a quick check on Wiki confirms this). I haven't asked Tom why he's adopted the slogan here; I think some things are best left a mystery. The track is the most m*n*mal thing I've heard from him yet, almost entirely constructed of beats, with liberal use of metallic delay effects weaving in and out of the mix. Then, just when you least expect it, a huge, glistening block of synth-pad chords swoops in and dominates for a few bars before promptly departing once more, leaving me slightly disorientated and wondering what the hell happened. The flip is called "Gather", and is also somewhat unexpected for entirely different reasons. It's a slice of downtempo dubwise atmospherics, coming from a similar sonic palette as some of Rob Smith's RSD material, with echoes of Renegade Soundwave circa "In Dub" - not the sort of thing you'd expect from the Pev at all, but obviously he likes to keep everyone guessing about where his muse is going, and he's certainly got my undivided attention with this one. It's in the shops now, so go buy it.

Then came an e-mail from Pinch with some MP3s of his new release on Tectonic, "Midnight Oil c/w Joyride". It's interesting to note the parrellel progress between Pinch and Peverelist at the moment - it's almost like they're in a micro-genre of their own: complex beats with galloping kick drums, a de-emphasis on basslines (no more than a one-note subsonic undertow), experimenting with weird fx that materialise and discorporate in the mix, heavy use of synth-pads to drive home the melodic 'argument', though Pinch's choice of pad textures are more eerie/atmospheric. Always that hint of Techno, a slight tint of Berlin, but never too overstated. Of course, they live in the same house so I guess it's inevitable that they're influencing each other...imagine sitting at the top of the stairs in their house, listening to the sounds drifting down the landing from their respective rooms, pushing the air around, blending and morphing. Two friends on a sonic voyage. Nothing unusual about that, except that in this case the world is listening in anticipation. Well, maybe bits of the world at least. Ummm, forgot to ask when this is coming out, but I'm sure it'll be quite soon.

Then, this morning, the postman brought me this... 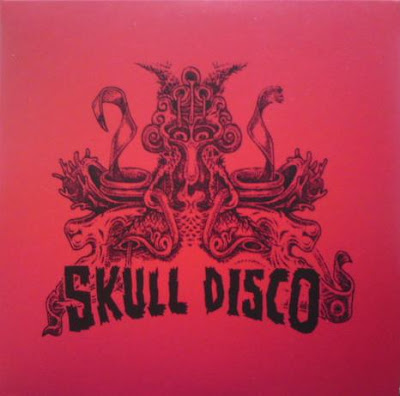 ...and I nearly chocked on my Fruit 'n Fibre in surprise because I thought those guys had long since abandoned me. The package came via S.T. Holdings, so I'm not sure who it was put me on the mailing list for this, but they have my eternal gratitude. This is the second Skull Disco CD anthology, called "Soundboy's Gravestone Gets Desecrated By Vandals". Disc 1 collects all the tracks since "Vansan/You Bring Me Down", so you get all those awesome Shackleton tunes like "Death Is Not Final" and "The Rope Tightens", along with Appleblim & Peverelist's "Circling/Over Here" on CD for the first time. Then disc 2 features a bunch of remixes, from the like of T+++, Bass Clef, Pole, Brendon Moller and Gieom, that twist the Skull Disco catalogue into all sorts of new mindbending shapes. I didn't get a press sheet with this, so can't say exactly when it's coming out (and Appleblim's not answering his phone as usual) but I think it should be in the shops in the next fortnight, so start saving your pocket money kids - this is the fucking business.
Intermittent service is resumed, though if you want to know what's really going down on the underground scene in Bristol and beyond, you'd be better off checking the Highrise Clothing Blog.
Posted by N.E. at 10:13 PM