Struggling with a mountain of prejudice here... 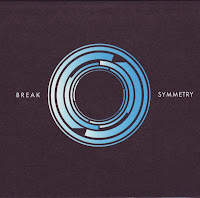 Break - Symmetry (Symmetry Recordings)
Ummm dunno who it was at S.T. Holdings who decided to send me this, but I'm really the wrong man for the job. My first reaction was "christ, do people still actually make records like this??!!". Opening track "Last Chance" sounds like it could've been made anytime in the past decade or so - ultra-slick drum 'n' bass with nondescript soulful guest vocal, admittedly with some pretty good sub-manoeuvres in the bass end and some neat production touches, but ultimately very safe and predictable. Okay, so Break's been around for a while and he knows his audience demographic. This album is very carefully crafted to sustain a certain sound for a particular scene, unfortunately one that I'm not ever likely to be a part of. But let's take a look at the positives. You get 18 tracks on the CD (which, depending on your point of view, is either great value or utterly exhausting) and it comes in an attractive fold-out card digipac sleeve. The production is pretty much flawlessly professional throughout - some of the intro sections sound kinda cool, but then all the formuleric elements start to creep in and my attention starts to wander. Of all the d'n'b tracks I like "Symmetrics" best, mainly on account of the earthier breakbeats, making me a bit nostalgic for the old Metalheadz sound. Occasionally Break slips out of the genre-straight jacket and tries something a bit different, like "Too Hot To Hold", a moderately successful hip hop-style track with rapping by SP, or the mellow mid-tempo groove of "Recovery". Then there's "It's Coming" which has a trancier feel with the four-to-the-floor pulse, but it's all still a bit too polite for my tastes. "Thin Ice" is a brief attempt to do something a little more abstract, though its the final track "In The Blue" that's the real surprise, or perhaps I should say relief. A slow, ponderous instrumental with a very 'live' feel on account of the languid guitar lines and some pleasant tinkling electric piano. Obviously there's more to Break than just breaks, but frankly I think we're on different planets. 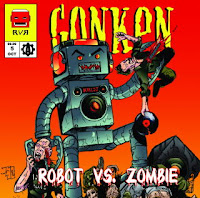 Gonken - Robot Vs. Zombie (Automation Records)
I struggle with this from the off, due to my almost clinical aversion to American snotty-indie white rap with eccentric lyrical themes, of which Mr. Gonken seems all too fond. But again, let's try and focus on the positives. It's got a nice cover design, with a classic pulp comic theme (in fact wasn't there a comic book awhile back actually called "Robots Vs. Zombies"? - I'm sure Doppelganger lent me a copy once) but unfortunately this is a download-only release, and only blaggers like me get special hard-format promo versions. But at least you can download all the artwork and make your own if you like (see website). And despite all the synth-pop-by-numbers of tracks like "Indie Rockstar 101" you get some strange collisions like "Brainbasher v2.0" with it's filthy oldskool breakbeats and pummelling distorted bassline. Mercifully there are a couple of instrumentals too: "A Study In Audiology" is a fairly enjoyable retro-electro romp, whilst "Taking It For What It's Worth" features a nice line in naive melodic IDM. But ultimately there's a geographical and ideological gulf between me and Gonken that's simply too wide to overcome. Best of luck, mate - you go your way and I'll go mine.
Posted by N.E. at 10:22 PM