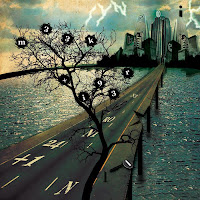 So I met this guy in a club a year or so back and we had a little chat about music and so forth. He was just visiting Bristol for the weekend and then returning home to Luton, so I assumed I wouldn't be hearing from him again. Then recently I get an email from him out-of-the-blue to tell me he's just released an album with a bit of a dubstep influence and would I like a copy? So I say sure, why not, bring it on, without having any expectations either way. The CD duly arrives and the first thing I notice is the packaging: the disc is sheathed in an unusual card envelope with the sleeve design glued on the front, a spray-painted Godzilla footprint and cryptic hand-written message on the back, giving the whole thing a distinct impression of hand-assembly. Clearly this is one of those limited-run, self-manufactured items that I always find so endearing. The package also contains a little booklet, with copious sleeve notes, perhaps more accurately described as a literary 'sub-text' - a fictional work with a heavy line in political metaphor. So it's a bit of a concept album too!

But the biggest surprise was the actual musical content. Opening track "Snares In The Surf" is dominated by clean, cyclic guitar figures that make me think of Vini Reilly's work in the Durutti Column rather than anything by, say, Skream. It quickly becomes apparent that this album is coming from the far-left of experimental dance music, where any influence from established genres is subverted to the artist's own twisted vision. So whilst "1868: Meiji Lumber Crisis And The Waking Woods" (hey, snappy title!) might have started-out from a skanky halfstep template, the end result is a fractured reverb-scape of decimated snares, distant chords and serrated feedback floating in a murky bubbling lagoon - the most literal interpretation of 'underwater dancehall' I've yet heard. Similarly, "Conveyor Belt Politics Prt.2" might have started life as a sort of techstep hybrid, but swiftly develops into something far more personal and unique. "Texan Coffee" is an improbable fusion of dislocated beats, guttural bass and twangy guitar licks, "Freudian Brain Surgeon" strips the beats down to a mere whisper, focusing on plaintive synthetic warbles and bursts of unclassifiably processed percussion, whilst "Karmic Adjustments" is a pure sound-bath of beautifully sustained melodic drones. Final track "Waltzing Godzilla" is almost post-rock in feel, with growling slabs of jagged guitar trailing across heavily echoed drums like early Tortoise in a really bad mood.

It's not a perfect album by any means - some tracks are less successful than others, and some tend to go on a bit longer than they perhaps need to, but the very fact that Meek Tiger is forging ahead, trying to carve-out a sound for himself in this age of sterile conformity and empty retrogressive posturing is something to be encouraged and, perhaps, cherished.

Now I don't normally post MP3s on this blog anymore but, with the artists' permission and encouragement, I'm making an exception here. So for a limited period you can grab the following track for 'evaluation purposes'...

As I said at the start this is a very limited release without any proper distribution, so for more information about how to obtain this CD, check the label website or contact the artist direct- daniel@vstmrecords.com
Posted by N.E. at 9:58 AM