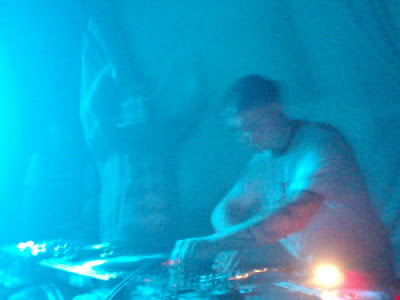 Goddamit, after two consecutive weekends of exposure, I've been completely brainwashed by the H.E.N.C.H. crew. Scorpio's simple-but-effective vocal mantras keep revolving around in my brain...I can't get the bitch out of my head!! Their two hour takeover of Dubloaded last night was nothing short of a mini-triumph. Despite the truncated schedule and lack of any big-name London djs, the regulars turned-up en masse for a night of pure Bristolian dubstep flavas. Whether that's because there's a genuine buzz about H.E.N.C.H., or an indication of the strong loyalty that Dubloaded now commands, I'm not sure. But basically, it was a re-run of what happened at Lakota last week, except with a decent room full of committed dubheadz, all of whom seemed to skanking-out proud to the unstoppable cycle of beats coming from Headhunter b2b Wedge b2b White Boi (above) b2b Kommonasmuck. The usual visual backdrops were absent this time, and the room was illuminated by just a single beam of blue light, adding an eerie, twilight hue, which was nice, although rendered my Nokia completely useless, yet again. So thanks to 'Carlybag' for posting a few pics at the Hijack forum. 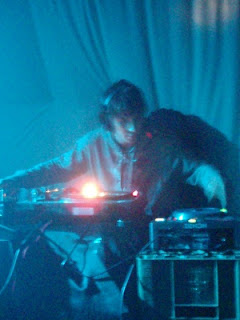 Headhunter and Wedge delivered the goods as always, whilst new recruit Kommonasmuck (left) turned heads with his energetic performance and huge production sound. Having barely stepped-up to the decks, he deployed his first weapon of the evening, the "HENCH Dub", which he had to pull-back almost immediately due to the palpable ripple of excited approval from the crowd. Later on, the White Boi delivered possibly the most intense moments of the evening, beginning with the syrupy bassline swagger of "Manson", followed by the apocalyptic blitzkrieg of "Rommel" (dodgy title, I know, but somehow it seems entirely appropriate) climaxing with the epic grandeur of "Hard Life". As anyone who tuned-in for their guest slot on Wedge's show last week will attest, these two are absolutely murdering it at the moment. I'm sure it's only a matter of time before the big dj's in the scene are begging them for exclusives...assuming they aren't already? I feel extremely privileged to be exposed to this music on the frontline, as it were. 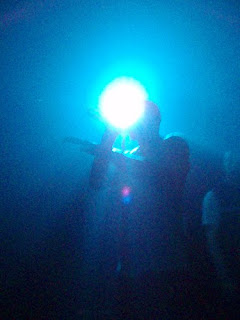 Jakes( right) was sharing mic duties with Scorpio, but his "3.09 v.1" and "Gilly Weed" riddims represent the most 'out there' experimental side of the H.E.N.C.H. equation. Extreme, compressed, bubbling with innovation and minimalist intent, Jakes' tracks skip to their own inner logic. One of the great aspects of this team is that they all have their own sound, and I can usually tell who did what. Hopefully the world at large will get to hear more of this stuff soon, but in an effort to spread the H.E.N.C.H. love, I've managed to acquire a recording of the evening, captured on Headhunter's minidisc recorder direct from the dj mixer. The actual sound quality is really good but, as before, there are quite a few drop-outs. Dunno why this keeps happening, but this is a D.I.Y. recording, straight from the fucking sewer, and we're just doing what we can here. The worst bits have been edited out, and hopefully you should be able to get a good impression of what's going on in this little neck of the world. Frankly, its just too damn good to keep it to ourselves. Check it....
Download H.E.N.C.H. at Dubloaded 13/05/06

By the way, although the first release from Tech Itch's new Ascension imprint isn't in the vinyl racks just yet, it's now available to buy in downloadable form via his page at Tune Tribe. As previously mentioned, this is a split release featuring Headhunter's debut commercially available track, the impossibly luxurious, beautifully constructed "7th Curse", along with Tech Itch's own "Implant", a tense, psychological thriller that sees this long-established d'n'b producer flexing his creative muscles in the exploratory waters of dubstep for the first time, with a surprise acid excursion kicking-in after the breakdown. Don't miss this one...
Posted by N.E. at 6:40 AM