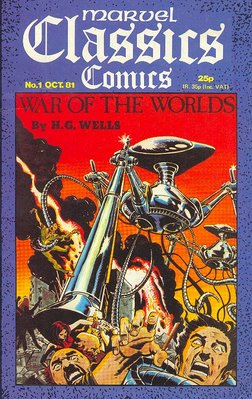 Whether it be from Jeff Wayne's soundtrack album, or Marvel Comics' adaptation (see left), Spielburg's blockbuster, or even the original book itself (first published in 1898), H.G.Wells' War Of The Worlds must've touched everybody at some point. A true timeless classic, it's fearful account of humanity under dire threat of annihilation at the tentacles of an alien invader remains the first, and still definitive, example of this particular form of Sci-Fi horror.

I was quite a keen reader of Wells' science fiction writing as a young teenager, in particular The Time Machine and The Invisible Man. Then, a couple of years ago I chanced upon a secondhand hardback edition of his collected works at a local bookshop, for a mere four quid. Of course I couldn't resist it, but then it spent the next 18 months collecting dust on my book shelf. Eventually I made a start on it and, several months later, I'm still reading it on a nightly basis, gradually working my way through Wells' entire sci-fi oeuvre. I've already ingested the horrific antics of mad vivisectionist Dr. Moreau, shaken my head in wonder at the keen imagination of The First Men In The Moon, and been completely enthralled by lesser known works like The Food Of The Gods. It's possible to detect a clear development of sophistication through his work. The earlier stories are shorter and focus on the scientific ideas that drive the fantastical storylines, but by Food Of The Gods, it's clear that Wells was intent on injecting some deeper observations about society and the human condition. One of my favourite moments is near the end when Redwood is suddenly struck by the way his relationship with his grown-up son has changed...

"For the first time in his life perhaps he realised how much more a son may be to his father than a father can ever be to a son; he realised the full predominance of the future over the past. "

But it's the combination of fanciful scientific ideas from the perspective of the beginning of the 20th Century, coupled with Wells' keen eye for social commentary and subtle political observations that really brings Olde England to life. I'm currently halfway through In The Days Of The Comet, which so far has had very little scientific element at all, apart from the ominous threat of the approaching comet. But the main focus is the Socialist anti-hero, railing against his lot at the wrong end of the class system in a grim industrial town, against a backdrop of war with Germany (an uncanny prediction from Wells in 1906). Wells' attention to detail, describing so eloquently the particulars of the man's life, and the relative levels of filth and squalor endured by the working man, really are very pungent. And it's quite strange that, the older I get, the more interested I become in history. I realise that I've never actually explored any of Wells' non-science fiction work. Perhaps I really should.
Posted by N.E. at 9:18 PM